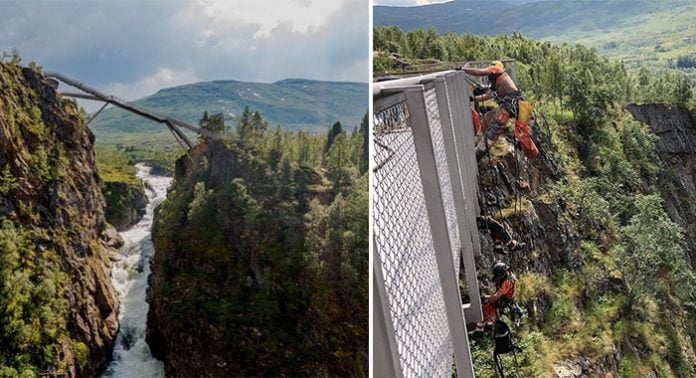 Is there anyone in the audience who is afraid of heights? Then you can be sure that you will be relieved just by seeing this bridge in the photo.

The bridge is located in Norway. Norway’s Voringsfossen Falls has long been a tourist attraction. Previously, there was no bridge here, but an architect decided to build a small bridge there.

The bridge is a small bridge that allows you to walk from one side of the waterfall to the other. Construction of the bridge began in 2018 and is now ready for passengers.

The design was created by Norwegian architect Carl-Viggo Holmebakk. The bridge is 47 meters long. The entire bridge is made up of small steps that allow people to walk on, and there are even 99 steps.

There is also a car park for visitors to the bridge at the waterfall. The strength of the bridge was given priority in the construction of the bridge, as a staircase bridge was built across the cliff. People were allowed to attend only after repeated tests and safety.

Archives
This div height required for enabling the sticky sidebar